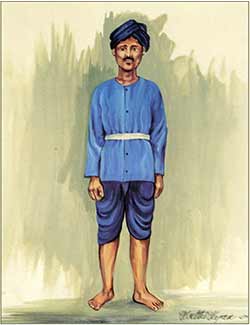 Copper plate inscriptions dated 1645, 1652, 1655 and 1656 are the most important artefacts about the Piramalai Kallars. According to these, during the period of Thirumalai Nayak, members of the community were appointed as guards (“kavalkarars”) of villages.The Piramalai Kallar group responsible for a village had to compensate for any theft in that village.

With the introduction of British rule and the fall of the Nayak dynasty, the Piramalai Kallars began to lose their work as guards. They participated in the South Indian Rebellion of 1800-1801 that resulted in Madurai and the adjoining regions coming under the British rule. When the rebellious Kallars refused to pay tax, the British abolished the kavalkarar system

Their wars with the British East India Company after the demise of the Madurai Nayakas is often regarded as one of the earliest struggles for Indian independence. The British hanged many and banished others to the Andaman Islands. Veerapandya Kattabomman, Puli Thevar, Dheeran Chinnamalai, the Marudu brothers and Uyyalawada Narasimha Reddy were some notable Polygars who rose up in revolt against the British rule in South India 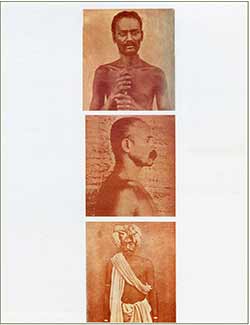 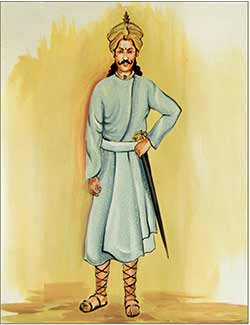 Polygar (also spelled as Palegara, Palaiyakkarar, Poligar, Palegaadu, Palegar, or Polegar) was the feudal title for a class of territorial administrative and military governors appointed by the Nayaka rulers of South India (notably Vijayanagara Empire, Madurai Nayakas and the Kakatiya dynasty) during 16th – 18th centuries. The Polygars of Madurai Country were instrumental in establishing administrative reforms by building irrigation projects, forts and religious institutions. Their wars with the British East India Company after the demise of the Madurai Nayakas is often regarded as one of the earliest struggles for Indian independence

Kotwals was a title used in medieval India for the leader of a Kot or fort. Kotwals often controlled the fort of a major town or an area of smaller towns on behalf of another ruler. It was similar in function to a British India Zaildar from Mughal times the title was given to the local ruler of a large town and the surrounding area. However, the title is also used for leaders in small villages as well. Kotwal has also been translated as Chief police officer. 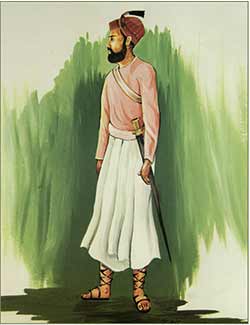 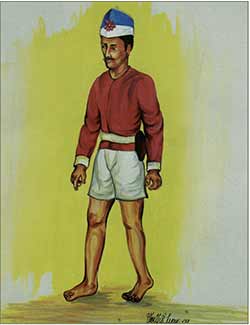 In its first century and half, the EIC used a few hundred soldiers as guards. The great expansion came after 1750, when it had 3,000 regular troops. By 1763, it had 26,000; by 1778, it had 67,000. It recruited largely Indian troops, and trained them along European lines. The military arm of the East India Company quickly developed to become a private corporate armed force, and was used as an instrument of geo-political power and expansion, rather than its original purpose as a guard force, and became the most powerful military force in the Indian sub-continent. As it increased in size the army was broken into the Presidency Armies of Bengal, Madras and Bombay each recruiting their own integral infantry, cavalry, artillery and horse artillery units. The navy also grew significantly, vastly expanding its fleet and although made up predominantly of heavily armed merchant vessels, called East Indiamen, it also included warships.

The Maratha army was not homogenous, but employed soldiers of different backgrounds, both locals and foreign mercenaries, including large numbers of Arabs, Sikhs, Rajputs, Sindhis, Rohillas, Abyssinians, Pathans, Topiwalas and Europeans. The army of Nana Fadnavis, for example, included 5,000 Arabs. 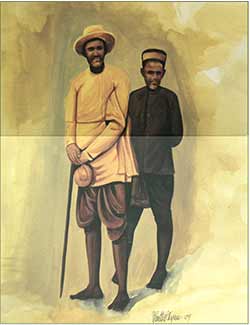 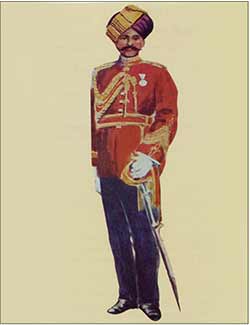 The Indian Army was the principal army of the British Indian Empire before its dismantling in 1947. It was responsible for the defence of both British India and the princely states, which could also have their own armies. The Indian Army was an important part of the British Empire's forces, both in India and abroad, particularly during the First World War and the Second World War.

Faujdar was a title awarded by Mughal and other Muslim rulers in South Asia to garrison commanders.In pre-Mughal times, it was a term referred to a military officer but did not refer to a specific rank. With the administrative reforms performed by Mughal emperor Akbar, this rank was systemised. One of the names used to describe the officer posted to act as the administrator of the sarkar was faujdar. 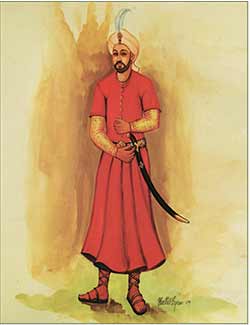 Pedda Naik engaged by the British to Guard the town of Madraspatanam with the assistance of peons. The system was the remnant of the ‘Kaval’ organization.

Board of Police constituted by the then Governor Josios DuPre to deal with removal of public nuisance, & maintenance of public health and order.

Post of Superintendent of Police was created to supervise the markets and to reduce the prices of provisions..

Comprehensive plan for the Police prepared by S.Popham to promote health and to prevent impositions and frauds..

Institution of Kotwal Police abolished, on complaints of extracting more money than was due from merchants. Office of "Poligar" (synonymous with "Pedda Naik") restored..

Francis Kelly and Vambaukkam Raghavachariar became the first Indians to be inducted as Police Magistrate and Dy. Supdt. of Police. .

Act XXIV marks the beginning of Modern Madras Police. The Act was also the forerunner for the Police Commission set up by the Government of India in 1906.

Madras Presidency Police bought the Police Headquarters Building for a sum of Rs.20,000/-. An additional sum of Rs.10,000/- was spent on expansion and repairs.

Formation of Malappuram Special Police to deal with periodical outbreaks of Muslim fanaticism by Moplahs.

The Madras City with an area of 29 sq. miles and population of 5,09,346 was divided into two ranges - Northern range in the immediate charge of Dy. Commissioner of Police and the Southern Range under the direct control of Commissioner of Police himself assisted by a Chief Superintendent.H.A. Stuart, Inspector General of Police, Madras Presidency was appointed Secretary of All India Police Commission.

Police Training School was strengthened and equipped to train the new cadre of Sub-Inspectors who were to replace the old Station House Officers (who were Head Constables).

Criminal Investigation Department was established. F.Fawcett was appointed as DIG.

The King's Police Medal was instituted for Gallantry and Distinguished Service.

Diwan Bahadur Parankusam Naidu was appointed as Commissioner of Police - the first Indian to occupy the post. P.B.Thomas, I.P., became the first Police Officer to be appointed as Inspector General of Police to head the Police Department.

Malabar Special Armed Police was formed in the wake of Moplah rebellion.

The CID was divided into Special Branch and Crime Branch

Madras Police Dog squad was formed. Madras became the pioneer in India after Independence to use dogs in the prevention and detection of crime.

Headquarters of the MSP (Tamil Nadu) was shifted to Thiruchirapalli.

City Police Hospital at Madras (Originally formed as a dispensary) was converted as a full fledged Hospital. Home Guards was created to assist police.H.A. Stuart, Inspector General of Police, Madras Presidency was appointed Secretary of All India Police Commission.

"Police Computer Wing", Madras was established. Tamil Nadu was the first State to start Computerisation. Tamil Nadu Police Commission set up under the Chairmanship of Thiru Gopalswamy Iyengar. Special Cell CID was formed to deal with extremist's activities. This was later known as Q' Branch CID.

"Police Computer Wing", Madras was established. Tamil Nadu was the first State to start Computerisation. Tamil Nadu Police Commission set up under the Chairmanship of Thiru Gopalswamy Iyengar. Special Cell CID was formed to deal with extremist's activities. This was later known as Q' Branch CID.

Tamil Nadu Police Housing Corporation merged with TN Housing Board. Police Commission appointed under the Chairmanship of former Chief Secretary Thiru Sabanayagam. Dr.R.Rajagopalan I.P.S., appointed as the Member Secretary of the Commission. Control Room was opened in the Directorate of Civil Defence.

Uniformed Service Recruitment Board was constituted for the recruitment of personnel in the non-gazetted category for the uniformed departments - Police, Prison and Fire Services.Once again the TN Police Housing Corporation Started Functioning as a separate entity

One Mobile Police Station and 80 Highway patrol vehicles introduced to improve highway surveillance and reduce accidents.117 police Clubs opened all over the State.

Merging of Chengai East District with the Commissionerate of Chennai city Police. The greater Chennai Police now has a jurisdiction over 588.7 Sq.Kms, with 156 Police Stations, the largest Commissionerate in the country. A new building for State Crime Records Bureau(SCRB) inagurated. The SCRB building is a State-of-the-art facility for the Finger Print Bureau, Police Computer Wing,Modus Operandi Bureau and Statistical Wing.

Sesquicentennial(150 Years) 1856-2006 of the Chennai Police Celebrated. Ariyalur District was newly formed, bifurcating the erstwhile Perambalur District. Hyundai Motors Ltd., Presented 100 Hyundai Accent Cars as a goodwill gesture to augment the Chennai City Patrolling fleet. Thus Chennai Police is the only force in the country having a fleet of sedans.

11.06.2014 - The newly built office opened for CB-CID in Egmore, Chennai.19.05.2014 Unified Closer User Group (CUG) Mobile network scheme is a unique scheme that covered all the 1.2 lakh Police Personnel of all ranks including the ministerial staff of the Tamil Nadu. The family members of Police personnel also have the option of joining the CUG scheme at their own cost. 24.02.2014 - Formation of Special Investigation Division (SID) in CBCID to curb the menace of fundamentalism, to investigate and expeditiously prosecute all cases relating to religious fundamentalism and terrorism. (G.O.(D).No.132, Home(Pol.XII) Department). 22.01.2014 - The 4th All India Police Commando Competition organized by the All India Police Sports Control Board, New Delhi, was held from 22.01.2014 to 27.01.2014 at the Tamil Nadu Police Academy, Oonamancherry, Chennai. The Master Health Medical Check up, a unique welfare measure free of cost once in a year for all the Police Personnel who have attained the age of 40 years. This program started on 2014.

09.10.2015 - Inauguration of the pilot implementation of computer generated (CIPRUS) FIR in Kancheepuram district.A new initiative to follow serious crime cases, a special unit in each District was created. As per announcement made during the Police Demand on 06.08.2014, a Special Wing called Serious Crime Squad (SCS) has been formed in 20 Districts. GO. No. 23 Home (Pol-12)Dept, Dt 07.01.2015.

15.04.2016 - The system generated FIR has been rolled out and being implemented successfully across the state....